Did you know there’s a secret language spoken amongst Carnival folk. In this instance, let’s call it ‘the talk.’ It’s shorthand for the job at hand, and it defines who belongs in the industry and who doesn’t. For example the ‘Bally’ attracts punters to the carny show by ‘building the tip,’ ‘freezing the tip,’ giving ‘the pitch’ using ‘the jam,’ and delivering ‘the blow off.”

The Ferris Wheel is known as the ‘chump-hoister.’ Junior rides like the spinning tea-cups are’ zamp rides’. In Gypsy circles, fortune telling is ‘Dukkering.’ The ghost train is the ‘dark ride.’ A newcomer to the carny industry is a ‘Forty Miler’ and the reason for operating any carny – ‘GTFM’ (get the fucking money.)

I can’t really explain why I’ve never been on a Ghost train, or horror ride. (Does the Scooby Doo spooky coaster count?) You may have recognised by now, I love a good scare. Getting the chills gives me the thrills and all that, but I’ve just never gotten around to taking a ride at a carnival or show that had skeletons jumping out of corners, and canned screams on audio. Having read Joyland by Stephen King, I will definitely hop on board at the next summer carnival, out of pure curiosity.

Part of the Hard Case Crime series, King has woven a truly engrossing tale. Of course it has all the hallmarks of King best seller, *read creepy supernatural themes* but it also has likeable and believable characters and a coming of age theme that is really really enjoyable to read.

College student, Deven Jones, takes a summer job at Joyland (think mini Disneyland/Gold Coast theme park on a smaller regional scale). He’s in the process of grieving a high school romance, and the carny life is just the distraction he needs.

However, Joyland is haunted by the legacy of a vicious murder, and when ghost stories emerge about the victim revealing herself in the Horror House, Deven is compelled to discover who was responsible.

With a fortune teller hinting what lies in Deven’s future, a relationship with a dying child and mother, and teenage friendships with other summer workers that should last a lifetime, the emotional impact and care-factor for the outcome is overwhelming by the end.

The descriptions of the carnival itself transported me to a summer showground, with sawdust, Dagwood dogs, hot jam doughnuts, and shouting carnies; tanned and leathery from a life outdoors, giving away lucky draw cards and selling hopes of the big prize.
While the book had me at outset with the well-developed mystery and ghost tale, its unfolded more as a story about growing up and aging, and about those who are taken too young. The ending was profoundly moving, convincing and authentic.

In Short: Better than any chump hoister; the rubes will be engrossed.

Credit: Props to Wayne Keyser and his website and eBook ‘From the Midway’ for the extra information I have presented here on all things carny.  See http://www.goodmagic.com/carny/index.htm to check it out and buy his book.

The Circus arrives without warning

no announcements precede it…

It is simply there, when yesterday it as not.”

The circus ‘opens and nightfall, closes at dawn.’

The Night Circus is a dazzling work that can make you dizzy with its playfulness and intrigue.  It’s utter fantasy, charged with romance, danger, haunting and history.  There’s a contortionist, psychic twins, a runaway boy, a leap between eras, an invisible man, and an unpleasant bet.

Jumping between eras of the late 1800s and 1900s it can be tricky to concentrate as you figure out which timeframe you have landed in.  However once you’ve mastered the magicians, circus performers and patrons you’ll get a tease of each of their back-stories and want to delve deeper.

The Night Circus is the story of two magicians destined to do battle with each other since childhood.  This competition is the by-product of a cruel and depraved wager between their masters who have taught them everything they know.  There are no magic wands, no spells or potions.  This magic is for grown ups – the power of invention, imagination and telekinesis.

The visual description of the circus itself is enough to sustain your interest.  Each tent is mythical, magical and evocative, but then there is this other haunting component of the past, personal conflict, emotions and obstacles

If I’m sounding vague and confused, well then I suppose I am.  There are so many levels to this fantasy, and it’s exhausting to try and explain.  Ultimately the circus is rich, inviting and pleasurable to explore, but it has an underlying darkness as the chapters progress and you know that the inevitable battle between the magicians is going to be epic and harrowing.

In Short: Magic for grown-ups 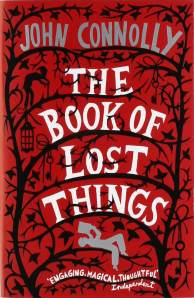 The last time I ‘read’ an audio book, I was about six years old. I had a cassette tape and book, and the narrator would ding a bell when it was time to turn the page.

I kind of thought audio books were the domain of grey folk or the vision impaired. However with a 2.5 hour commute and the self-imposed deadlines associated with writing a book review blog, I decided to give it a try. To compound the feeling of, shall we say, maturity, I actually borrowed an audio book from the library.

The Book of Lost Things, by John Connolly was a surprise to me. I didn’t expect to enjoy the process of being read a story, and the language and style of writing, coupled with excellent narration enhanced a good plot immensely.

Set in 1939, London, we meet David a twelve year old boy mourning the loss of his mother. In just a few moments of listening I was captivated. I drove with blurred vision as the narrator described the heartbreaking moments of saying goodbye, the prelude to, and day of the funeral, and of David trying to understand the loss; closing his bedroom curtains and lying squashed under his bed to simulate the experience his Mum must be having in death.

With the benefit of verbal context, pauses in all the right places, whispers and tone, the narrator added to the language of the text; the characters instantly likable, and the revelation of drama and family angst was subtle and clever.

As war rages across Europe, and David’s personal anger grows, his only comfort is his books. Books which contain folk tales and stories that once kept him and his mother so close. The books take on their own role in his grieving and begin whispering to him inside his head.

After exploring the grounds of his new home a little too thoroughly, he is soon propelled into a land that is seemingly a construct of his own imagination, but also very real.

I must admit, I did not see an alternate world coming, and was a little stunned at first when the narrator began to add noises and dialogue in accents and strange voices. However it adds to the fantasy, as David tries to find his way back home, with his only hope being an elderly far away King who owned a mysterious book: The Book of Lost Things.

The characters David encounters are typical of a fantasy or fairy tale; trolls, woodsmen, knights, werewolves, and even Snow White, however the outcomes are not. The tale is peppered with dark and disturbing versions of classic fairytales, and genuinely evil antagonists. The plot is intense and suspenseful and David is one of the most lovely characters I’ve read in a long time.

Postscript: Having thoroughly enjoyed the experience of an audio book, it got me hypothesizing about the importance of the narrator. Nick Rawlinson was perfect for this title. His voice was smooth and soft and polished and powerful at all the right times. However it wasn’t until I started my second book that it became obvious just how important the right storyteller was to the experience. Admittedly my second audio book was more of a chick-lit crime drama, and I soon learned it was peppered with schmaltzy and unnecessary descriptions of passion. When the Texan twang of a scratchy sounding broad came over the stereo, I cringed. When she started talking about nipples and ooh ahhs, I nearly rear-ended the bus in front of me. (Innuendo intended) With that CD sailing out my sun roof, I became determined to check the quality of the voice, as well as the story, for my next audio book.