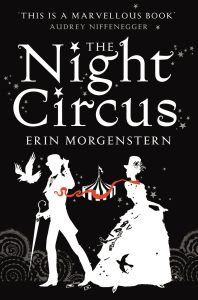 The Circus arrives without warning

no announcements precede it…

It is simply there, when yesterday it as not.”

The circus ‘opens and nightfall, closes at dawn.’

The Night Circus is a dazzling work that can make you dizzy with its playfulness and intrigue.  It’s utter fantasy, charged with romance, danger, haunting and history.  There’s a contortionist, psychic twins, a runaway boy, a leap between eras, an invisible man, and an unpleasant bet.

Jumping between eras of the late 1800s and 1900s it can be tricky to concentrate as you figure out which timeframe you have landed in.  However once you’ve mastered the magicians, circus performers and patrons you’ll get a tease of each of their back-stories and want to delve deeper.

The Night Circus is the story of two magicians destined to do battle with each other since childhood.  This competition is the by-product of a cruel and depraved wager between their masters who have taught them everything they know.  There are no magic wands, no spells or potions.  This magic is for grown ups – the power of invention, imagination and telekinesis.

The visual description of the circus itself is enough to sustain your interest.  Each tent is mythical, magical and evocative, but then there is this other haunting component of the past, personal conflict, emotions and obstacles

If I’m sounding vague and confused, well then I suppose I am.  There are so many levels to this fantasy, and it’s exhausting to try and explain.  Ultimately the circus is rich, inviting and pleasurable to explore, but it has an underlying darkness as the chapters progress and you know that the inevitable battle between the magicians is going to be epic and harrowing.

In Short: Magic for grown-ups